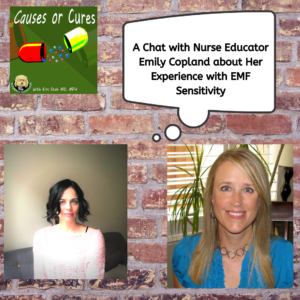 In previous blogs and podcasts, I featured doctors who had studied the potential health effects of Electromagnetic Fields (EMFs). They were concerned with exposure from EMF-emitting devices, such as our smartphones, laptops, I-pads, wireless headphones and other wireless devices. I’ve interviewed Dr. Fiorella Belpoggi, who conducted one of the two largest animal studies on EMF exposure, Dr. Hugh Taylor, the chief of OB/GYN at Yale University who conducted a study on EMF exposure during pregnancy and ADHD in offspring, Dr. Anthony Miller, a physician and cancer epidemiologist who worked for the World Health Organization, Dr. Colin Pritchard, who discussed the potential link between EMF exposure and early-onset dementia, and Dr. Paul Heroux who runs a lab dedicated to electromagnetism out of  McGill University. He discussed why those EMF shields folks stick on the backs of their devices do not work and may actually be increasing your exposure to EMF radiation. In my latest podcast, I was happy to interview a registered nurse and nurse educator who has something called EMF Hypersensitivity, though sometimes it’s just called EMF Sensitivity. The World Health Organization calls it something different, and I’ll get to that below.

Before diving into EMF Hypersensitivity, I think it’s important to define EMF radiation, the type of radiation that is emitted from our smartphones and wireless devices. It’s a type of non-ionizing radiation, meaning it doesn’t directly steal electrons from atoms or damage our DNA, like ionizing radiation can. There are different types of EMF radiation, all classified by different wavelengths. For example, microwave radiation is a type of EMF radiation, and includes things like microwaves, cellphones and airport scanners. Many stakeholders will definitively tell you that EMF radiation can’t harm you, because it’s non-ionizing. That statement is problematic for three reasons: 1) We can’t conduct the gold standard of evidence, a randomized, placebo-controlled trial (RCT), to study the effects of EMF-exposure on humans, because it would be unethical. Zero institutional review boards would approve such a study. At this point, it’s also impossible to control for EMF exposure in a world that is now saturated in it. 2) Not only are they making a definitive statement without ever having conducted a RCT on humans, but they are ignoring the many animal studies and epidemiological data ( case studies, cohort studies, case/control studies) that show EMF radiation has the potential for negative health effects in humans. 3) They are making a definitive statement based on the belief that “non-ionizing radiation” can’t be harmful, which not only ignores the studies that show it can be, but also ignores the proposed mechanisms of action of  how it causes harm. It’s also not scientific. If you observe something that you can’t explain, you shouldn’t say it’s not happening simply because you don’t know how to explain it.  That said, there are some people who have a massive financial interest in silencing anyone who questions the safety of smartphones and wireless devices.

EMF Hypersensitivity was first defined in 1997 by Bergqvist and Vogel in a European Commission Report. The phenomenon was first described in the early 1980s during a major epidemiological investigation of video display terminals and health effects in Scandinavian countries. During that investigation, in which there were several published reports, some people claimed higher rates of eye problems and facial skin symptoms when working near video display terminals. The World Health Organization acknowledged it officially in 2006 and classified it as an Idiopathic Environmental Intolerance to EMF, or IEI-EMF. That said, it is not widely known or accepted as an official diagnosis by the medical community, and there isn’t much reliable research in this area at all. Most of the studies are self reports.

From the available research, the highest rate of prevalence is in women in their forties, with Sweden having the lowest prevalence ( 1.5%) and Taiwan having the largest (13.3%). The state of California has the highest reported prevalence in the US (3.5%). Reported symptoms include fatigue and sleep disturbances, memory and attention problems, headaches, skin tingling and warmth, tinnitus ( ringing in ears), and throat, eye and ear irritation. Some cases are associated with odor and noise intolerance. Experts speculate that genetic polymorphisms or a predisposition to being sensitive to physical stressors is associated with EMF Hypersensitivity. Most patients are self-diagnosed and have a history of seeking out doctors for their issues and not receiving satisfactory answers. Unfortunately, a valid diagnostic tool is lacking, though some researchers are working on one.  (In fact, I’ve chatted with one in Australia, and am trying to get him on my podcast.) The lack of both a diagnostic tool and widespread acceptance in the medical community has caused many of those with EMF Hypersensitivity to seek out and try different therapies and treatments on their own. I should note that there is a fairly large and active Facebook group for people with EMF Hypersensitivity, and folks often share tips on what does and doesn’t work for ameliorating symptoms. It’s worth joining if you are at all concerned about this.

The most common triggers for EMF Hypersensitivity are mobile phones, cordless phones, powerlines and personal computers. Based on an analysis of self reports, 89% of those with self-diagnosed EMF Hypersensitivity consulted a GP first. 89% keep themselves away from sources of EMF radiation as much as possible; 60% limit their use of mobile phones; 73% do not use a wireless network and 93% use a computer with a plasma or cathodic screen.

Emily Copland, my podcast guest, is a woman who worked as a registered nurse in interventional radiology and then later became a nurse educator. She also has EMF Hypersensitivity and describes the onset of mysterious and frightening symptoms, how she figured out what was causing them and what she did to help herself. Her story is very specific, powerful and even more impactful given that she works in healthcare. As I listened to her story and her frustration of trying to determine the source of her symptoms, I wondered how many other people are out there, experiencing similar symptoms yet short on answers. Perhaps EMF Hypersensitivity is something for them to consider? I personally think that over-exposure to EMF radiation can impact us, especially neurologically, and I take steps to minimize mine. Either way, I hope you listen to her story and learn something. Also, would love for you to stick around and subscribe to the podcast.

You can listen to the Causes or Cures EMF Sensitivity Podcast here.

Interested in trying a ZENBand? ( Free shipping, always, for orders in the US over 30$.)

Read or Listen to  Yours in Wellness, Krystal Heeling!  My short parody on the sleazy side of the wellness industry.

It’s so short, it’s more like a half-book. But it’s an important topic and here’s why I wrote Yours in Wellness, Krystal Heeling: Letters from the Wellness Industry.