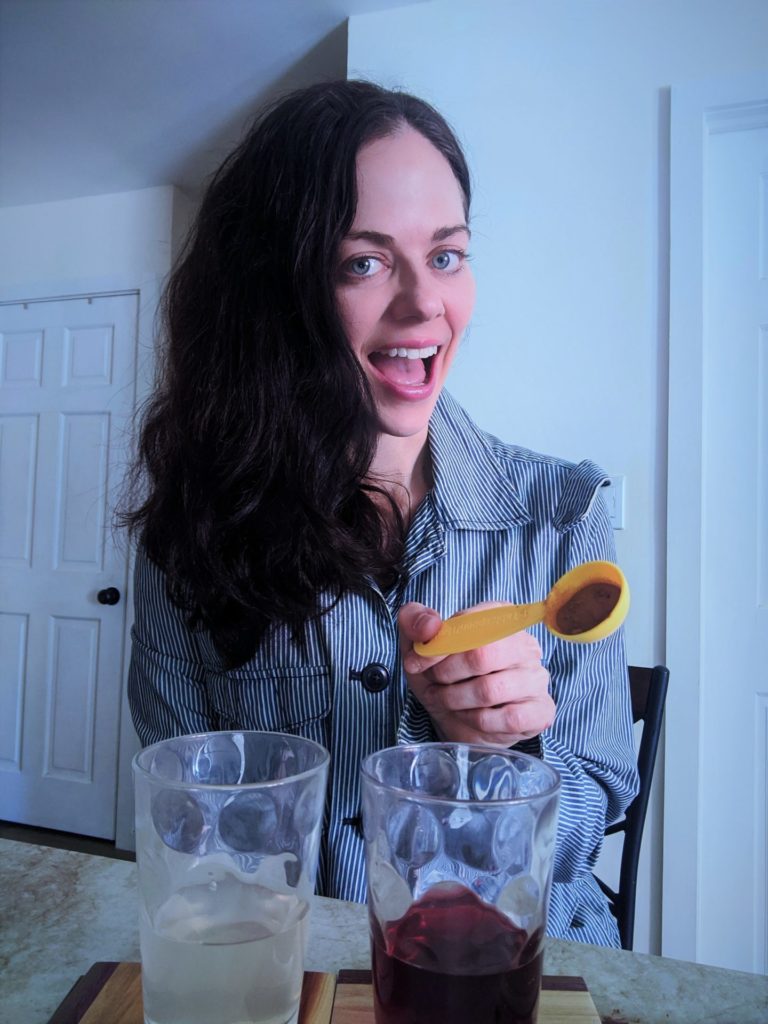 Some of you know about my struggle with bulimia. It started my senior year in high school, continued through my cadet years at West Point, the army, and through much of medical school. In fact, bulimia was a huge reason I suffered a major breakdown during medical school that took me on one wild and dangerous ride. If you don’t know the story, I wrote it down. I wrote it to serve as a cautionary tale, but it’s also solid entertainment. 😉  It’s called Manic Kingdom and you can read it here. Why am I talking about my struggle with bulimia in a blog on natural tips for controlling blood sugar? Because during my initial recovery stages, I became interested in finding ways to reduce spikes in my blood sugar. While I think there’s a psychological component to bulimia, there’s also a massive addictive component that, for me, was the hardest part to overcome. I ONLY craved and binged on high sugar foods, so breaking that addictive cycle was key. I discovered that my urge to binge became much stronger when my blood sugar took a nosedive, so part of my recovery was searching for foods that steadied my blood sugar. I also gained weight from bulimia (you don’t always lose weight, that’s a common misconception) and was concerned that I’d become prediabetic or develop Type 2 Diabetes if I couldn’t stop the binge/purge cycle for good. Anyhow, it was a monster to beat, but what helped a lot was eating foods that have a low glycemic load. Many people concerned about blood sugar eat foods that are low on the glycemic index. The difference between the glycemic index and the glycemic load is that the glycemic load not only takes into consideration the type of food and how much it raises your blood sugar, but the amount of food as well. To me, it felt more precise.

Before I explain my top three natural tips for controlling blood sugar, why should you even care? It’s because a consistently high post-meal blood sugar level causes insulin spikes. While insulin is necessary for cells to take in glucose and use it for fuel, too much insulin can lead to increased fat storage and weight gain. Over time, the cycle of high blood sugar and high insulin can lead to insulin resistance, which sets the stage for prediabetes, obesity, Type 2 Diabetes, cardiovascular disease and metabolic syndrome. Type 2 Diabetes comes with a plethora of health complications, such as microvascular damage that leads to eye and heart problems, neurological issues and more. America has an epidemic of  obesity and Type 2 Diabetes. The two go hand in hand, which is why the first step to treating Type 2 Diabetes, or someone who is prediabetic, is a dietary and exercise intervention. The dietary intervention should include foods that have a low glycemic load ( meaning they won’t cause a spike in blood sugar or insulin). I should also note that earlier approaches to Type 2 Diabetes didn’t focus on post-meal blood sugar as much as fasting blood sugar. The latest research supports a multi-faceted approached, which includes controlling blood sugar levels after eating, in order to significantly reduce complications from Type 2 Diabetes.

Some of my blog readers have prediabetes or Type 2 Diabetes. Some are struggling with obesity or weight loss in general. Others are following a low-carb diet and lifestyle. Many of you are struggling with bulimia. I know this, because I read everyone of your emails and empathize with all of them. No matter who you are, controlling your blood sugar is beneficial, and I hope these three natural tips are useful to you. Also, every tip I provide has at least one randomized, placebo-controlled study (RCT) to support it. I usually won’t post a health tip unless it’s supported by an RCT, though I do make exceptions. Either way, I’ll always inform you of the level of evidence.

Okay. Here are my three natural tips for reducing blood sugar after eating. (Please remember that these are just tips to go along WITH a healthy diet and lifestyle, not to replace them!)

Supplementing with vinegar after meals is shown to reduce blood sugar and insulin secretion in healthy individuals as well as in individuals who have Type 2 Diabetes. The Hemoglobin A1c value is a measurement used to assess the long-term glucose control in individuals with Type 2 Diabetes. Lower values are better than higher values ( Lower than 7). Daily vinegar consumption has been shown to reduce the Hemoglobin A1c values. Does the type and amount of vinegar matter? Probably. Different studies used different types and amounts of vinegar, in both liquid and capsule form. There is also evidence suggesting that vinegar is only useful after eating meals that are high on the glycemic index. What do I do? I mix 1/4 cup of wine vinegar or Apple Cider Vinegar with 3-4 cups of hot water. When do I drink it? After I eat a heavy meal. Please remember to dilute and sip it, as the vinegar can burn your throat, or if you have asthma like me, can trigger bronchial spasms.

Even though this tip might sound counterintuitive to some, this is my favorite natural tip for reducing blood sugar after eating. Why? Because a lot of  Type 2 Diabetics and people who follow low carb diets avoid fruits. They are either afraid of fruits spiking their blood sugar or just don’t like to eat it. This is unfortunate, because a diet high in both vegetables AND fruit is considered the healthiest. Low calorie, unsweetened cranberry juice gives them an easy get-out-of-jail-free card. One randomized, double-blind, clinical study showed that men with Type 2 Diabetes who drank 1 cup of unsweetened cranberry juice/day for 12 weeks, lowered their blood sugar levels while the group that didn’t drink the cranberry juice did not. The proposed mechanisms of action are that cranberry juice slows gastric emptying of sugar ( thereby reducing blood sugar), and that it makes insulin more efficient. Cranberry juice is traditionally known for preventing (not treating) urinary tract infections, because it helps prevent bacteria from attaching to the urinary tract. Individuals with Type 2 Diabetes are prone to UTIs because of increased sugar in the urine. Hence, this is a second potential way cranberry juice can help prevent UTIs, especially in diabetic patients. Cool, right?

Cranberries are awesome, because they have the highest level of antioxidants of any fruit by fresh weight. Their high level of antioxidant activity is linked to lowering oxidative stress in the body, which is important for cardiovascular, immunological and overall health. There’s really no reason not to add 1 cup of unsweetened cranberry juice to your daily diet. Please make sure it’s unsweetened, because the sweetened cocktail versions often have a lot of added sugars and ingredients you want to avoid.

Sometimes you’re not in the mood for vinegar or cranberry juice…but what about cinnamon? Some studies show that taking 1-6 grams of cinnamon with a meal can reduce blood glucose levels. Cinnamon appears to slow gastric emptying. A randomized controlled trial showed that cinnamon bark powder can improve blood glucose levels, as well as other parameters, in Type 2 Diabetic patients. The most significant effects were observed in patients with higher BMIs. Another study showed that adding cinnamon to a meal can control blood glucose and insulin levels after a large meal in individuals with normal/healthy weights. Remember above when I mentioned that Hemoglobin A1c was a good measurement of long-term blood sugar control? Well, that comes into play here too. A randomized controlled trial showed that 1 gram of cinnamon/day for 90 days significantly reduced Hemoglobin A1c levels in patient with Type 2 Diabetes, compared to patients who did not supplement with cinnamon. Please note that some studies weren’t as positive about cinnamon. For many, the efficacy of cinnamon is still “up in the air” or doesn’t do much of anything over placebo. However, outcomes vary depending on the amount and quality of cinnamon used, as well as the population being tested. Personally, I think it works. So what do I do? Whenever I’m drinking coffee with sugar, eating breakfast with sugar or eating a dessert, I add  about 6 grams of cinnamon, which is a tad more than 1 teaspoon. I usually don’t put sugar in my coffee though, so it’s mostly for sugary desserts.

I hope you guys find these tips useful. If you have any questions, feel free to contact me here. I try to respond to everyone, though sometimes I’m busy and can’t. I also want to invite you guys to check out my Causes or Cures podcast if you haven’t yet. I spend a lot of time searching for guests who are not only experts and seasoned researchers on timely health and wellness topics, but folks who I know will provide value to my listeners. I’m in the process of editing two great podcasts on supplement ingredients, contaminants and effectiveness that you don’t want to miss. For example, if you’re interested in low-carb diets, I recently featured a nephrologist who published a paper on the long-term evidence for the Keto diet. But fair warning: He wasn’t that enthusiastic about it!

For anyone interested in a PDF of a glycemic load chart, write me. I made one and can email it to you. It’s the one I follow. For anyone interested in more tips for beating bulimia, stay tuned or follow me on Instagram for updates. I plan on posting a web series dedicated to my battle with bulimia. Believe me, I did a lot of think-outside-the-box stuff to get ahead of it.

Also, if you get the chance, I’d love for you to read my new satire, Yours in Wellness, Krystal Heeling. It’s a parody on everything I think is wrong with the business of wellness. I think it’s important, I think it will make a lot of you laugh, hopefully think…, I KNOW the book will make some people angry, but at the end of the day, I really hope it starts conversations. I’m fine if you disagree with me and the book. Disagreement is healthy. The important thing is that we can talk about it. The audio version is currently being recorded ( not by me, someone with a much more theatrical voice), so if you prefer to listen, you’ll have to wait a little longer.

Thanks for reading, guys. Please continue to stay healthy!  🙂

4 Responses to “Natural Tips for Controlling Blood Sugar After Eating”