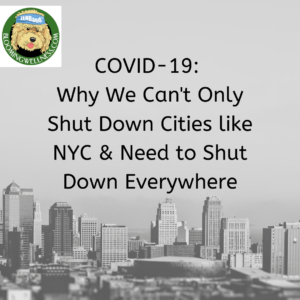 Most of America has been ordered to shut down as we brace for the uphill battle against COVID-19. Yet, despite overwhelming consensus from the medical and public health community, there has been shouts to open up America, restart our economy and allow people to work. There has been a lot of activity on Twitter around this issue, and from what I’ve seen, mostly political pundits and politicians urging the President to turn America back on. If I was to organize their responses, I’d use categories such as: Fear of total economical collapse; Denial of a pandemic; Fear that socialism is taking over, and Anger over a perceived violation of personal liberties. Such politicians and pundits have offered alternative solutions, some more ridiculous than others, such as: Quarantining all nursing homes and letting young people live their lives, “Only shutting down commie cities, like NYC,” and the suggestion of a “Less of a shut-in” from Larry Kudlow earlier this afternoon. It’s hard for me to wrap my head around those, considering many older people in the high-risk group are NOT in nursing homes. Many are living very active lives. And Larry, really? Less of a shut-in? Is that like one foot out-the-door and one foot in quarantine? What didn’t stand out among the anti total-shut-down advocates is their knowledge of public health, infectious disease, epidemics and medicine.

The fact is, in the fight to get ahead of COVID-19, we will experience loss of personal liberties. The economy will suffer, tremendously. People will lose jobs and suffer financially. These are terrible things that we will have to address as a nation. But what’s worse than all of those things put together? Mortality. Morbidity. Losing lives because we ignored the wisdom of seasoned medical and public heath experts. Old people, young people, immunocompromised people, completely healthy people…the virus has killed people from every group.

Today, the campaign to turn America back on seemed to have gained traction, even though the virus isn’t predicted to peak for weeks out. I found myself both equally baffled and angry. I live in New York City. The governor is begging for ventilators, there are tents set up outside traditional hospitals, the number of cases and death rate are increasing daily, some of my doctor friends are being move from traditional hospital rooms to the ICU (as patients), and the notion that our healthcare system will be dangerously overwhelmed is written on the wall. That’s New York City, they say. It’s a dense population and now America’s epicenter of the COVID-19 crisis. Smaller towns, less dense states and rural areas don’t have to worry, they say.

Oh, but they do. I will try to explain why in a simple way.

First, they’re right about population density. The more dense a population, the easier a virus will run through it. When it comes to population density, New York City, and other cities, are at a clear disadvantage when it comes to controlling an airborne infectious disease like COVID-19. But that doesn’t mean less dense areas are completely out of the woods, and that has a lot to do with the epidemiological characteristics of the virus and our response thus far. Also, let’s not lose sight of the fact that cases have traveled in and out of cities, and we now have positive cases all over the country.

I’ll start by explaining the epidemiological characteristics that make COVID-19 a particularly contagious and lethal virus.

Ro represents the reproduction number for any virus. In a nutshell, it’s the average number of secondary cases generated from a primary case, if the entire population was susceptible. If it’s greater than 1, the number of infections are likely to increase. If it’s less than 1, transmission is likely to die out. COVID19’s Ro is high. I’ve read one analysis that averaged it to be 3.3. The World Health Organization has a slightly lower Ro. From other countries’ data, COVID19 had a high Ro even when case isolation was used early and strictly enforced. To me, that indicates the possibility of a lot of asymptomatic spread. COVID19’s Ro, from what I’ve read, is higher than during the SARS outbreak (a sister Coronavirus) and we know that COVID-19 is already more widespread than SARS. ( The goal is to get Ro to 1 or below 1. That means you have a good shot of beating an epidemic.)

It’s estimated to be between 4-8 days. The serial interval time is the time from symptom onset in the “index” or “first” case to the secondary case. In comparison, H1N1 has a shorter serial interval time, which means that symptoms manifest faster… so it would be easier to recognize and isolate people.

The incubation period for COVID-19 is 5-6 days. That’s relatively long. This plus a long serial interval time creates the potential for a lot of spreading. This is also where COVID-19 differs from SARS. SARS didn’t have a long incubation period, which made it easier to control asymptomatic spread.

Folks have been tossing around mortality rates that are cringe-worthy. They’ve wrongly compared mortality rates to other outbreaks and made false conclusions. What one should pay attention to, when it comes to mortality rates, is the denominator. You want to make sure you compare apples to apples and oranges to oranges. The case fatality rate is the death rate in the number of cases that tested positive. It’s not the death rate for the entire population. While it isn’t a perfect measurement, because not all positive cases will be documented, it’s a good measurement when comparing outbreaks. The case fatality rate for COVID-19 varies a lot, as one would expect for a new infectious disease, but right now, it clearly is significantly higher than the seasonal flu. So when people say, “the flu kills more people than this,” they’re simply wrong.

Morbidity, here, refers to any lingering effects after recovering from a viral illness. There hasn’t been much of a discussion around morbidity and COVID-19. However, I have read reports of permanent lung damage in patients who have recovered. If we look at SARS, there was significant morbidity after patients recovered. There were changes visible on lung scans. Others were diagnosed with pulmonary fibrosis and restrictive airway disease. Some patients had muscle weakness, poorer lung function and shortness of breath. Psychologically, many had issues with anxiety and depression.

In addition to the above epidemiological characteristics of COVID-19, which show it’s a contagious and deadly virus, one needs to consider our initial response to the outbreak. The initial response to an outbreak, especially an airborne one, is the most critical. If we get that wrong, we will be playing catch-up with the virus for a long time. I’m not here to blame anyone, but our response was slow. SUPER slow. If we instead swiftly and aggressively identified positive cases, isolated them, traced all of their contacts and quarantined them, we would be in a better spot than our current one. Singapore, a highly dense population, did this extremely well and has efficiently curbed viral spread. I hope we model Singapore’s approach in future outbreaks ( there will be future Disease X’s), but we fell short this time and the virus spread like fire. In the coming weeks it will overwhelm our health system, first in cities like NYC, and then elsewhere as more and more people become symptomatic. Small towns will be hit. Rural hospitals will be hit. Hospitals in poorer, rural areas that are often understaffed and under-resourced will feel those hits hard. That said, because the population in those areas is naturally less dense, fast isolation of positive cases and fast quarantining of all contacts via tracing right NOW can help slow the storm about to hit their hospitals.

I also want to stress two important facts that we don’t have a lot of data on: A lot of people from surrounding suburbs and small towns commute to cities for work. I’ll use NYC, Long Island and the Delaware Water Gap area in Pennsylvania as an example. People drive in or take the Long Island Railroad to NYC from Long Island daily for work. The same goes for the Delaware Water Gap. People drive in or take the Martz bus in daily for work. Then what do they do at the end of the work day? Take the same transportation home. This means that we’ve had a constant influx and efflux of potential cases into and out of NYC, up until Gov Cuomo completely shut us down. A similar trend happens with other cities, as cities have most of the jobs. Also, people have been exiting NYC and retreating to summer homes, friends’ places, hotels, etc. in surrounding areas for over the last 2 weeks. They’re still doing it. While the streets have become emptier and emptier here in NYC, so have apartments and town homes. The occupants are now in a new geographical location. Though Dr. Fauci recently requested that folks who left NYC, and other cities, self-isolate for up to 14 days, we know that probably didn’t happen. At least not for everyone. Were some of those people positive? It’s very possible, and only furthers my opinion that we need to remain shut down to slow the spread in the most optimal way for everyone.

Let’s not forget this either: Other diseases and ailments and medical emergencies didn’t get together and suddenly go on holiday. They’re still around, will require medical attention, and will only add to burying our health system in the age of the Coronavirus.

And if we open back up too soon, before we have a solid grip on the virus, what will THAT economic damage look like? Will we immediately shut down again? Is there a model for that very real and potential outcome?

Given the facts as they stand today, my opinion is that it’s in the public’s interest for America to remain shut down. That’s our only chance of getting ahead of COVID-19 and saving the most lives.

I hope this makes sense. It’s a quick summary, it’s my opinion, but if you have any questions, please post below and I will try to answer.

You may also want to check out:

Anecdo or Anecdon’t? Traditional Science vs Anecdotes in The Age of  the Coronavirus

The Art of Social Distancing in the Throes of COVID-19

My new Parody on the Wellness Industry & Big Pharma: Yours in Wellness, Krystal Heeling.

One Response to “COVID-19: Why We Can’t Only Shut Down Cities Like NYC”