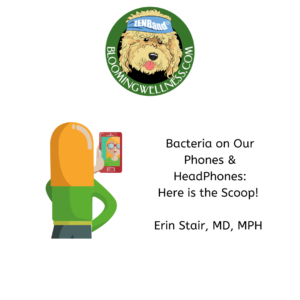 Let’s talk bacteria on our  phones, but first, a story: A young woman was walking slowly down the busy New York City sidewalk.  Her head was down and her eyes were glued to her phone as she typed something on the keyboard. I was walking in the other direction. I could have moved, but I didn’t. She walked right into me and was startled, as if she realized she was on a sidewalk and not at home on her couch. She then apologized. I walked by, wondering, “Should I have apologized to?” The answer is No. No, I shouldn’t have apologized, because she should be glad I wasn’t a bus. Folks, for a lot of reasons, we need to put away the phones and look up more.

The encounter got me thinking. How many ways can our cell phones kill us? I’ve already posted a few links and interviews that touch on my skepticism surrounding the notion that EMF radiation ( ElectroMagnetic Radiation) is completely safe. ( And if you don’t like to read, there are a ton of researchers of this topic featured on my Causes or Cures  podcast.)  In the  future, I’ll write about cases involving “cell phone neck” and “selfie wrist” and of course there is the ceaseless debate on how cell phones affect our mental health and ability to connect with one another in person. Perhaps because it’s flu season, I started wondering about the germs on our phones. What sort of bacteria are on our phones?  Even our headphones. Phones and headphones are fomites ( the official word for an object that carries germs) and since we touch them constantly, bring them everywhere, share them with each other and hold them up to our ears and mouths, I wanted to research the potential for germ growth and transmission.

Forty cell phones in a healthcare setting were analyzed for microbiological contamination. The healthcare setting is interesting because there are a lot of germs, a lot of sick people to spread germs, and a lot of sick people with low immunity who are more prone to being infected. Phones of  both healthcare workers and patients were analyzed. Results showed that ALL of the phones were contaminated. The most prevalent bacteria were Methicillin-Resistant S. aureus ( 52.5% of phones) ; Coagulase-Negative Staphylococci (50%) and Non-Anthracis Bacillus spp ( 42.5%).  Coagulase-Negative Staph was found most on doctors’ phones;  Methicillin-Resistant S. aureus  (MRSA) was found most on nurses’ and patients’ phones.

Methicillin-Resistant S. aureus mostly causes skin infections, but in more severe cases, pneumonia and sepsis. It’s more challenging to treat, because it’s resistant to several antibiotics. Coagulase-Negative Staph lack coagulase, an enzyme that causes fibrin in the blood to clot. Bacteria that have coagulase can create a protective barrier of clots, making it harder for the immune system to kill them. For this reason, Coagulase-Negative Staph are generally considered less dangerous than Coagulase-Positive Staph. Coagulase-Negative Staph are commonly found on the skin, and infections normally aren’t a problem. However,  infections from Coagulase-Negative Staph become a problem for individuals with poor immune systems; individuals with central lines; catheters; or prosthetic joints- you know, folks often in hospitals.  Bacillus spp ( the ones that don’t cause Anthrax poisoning) , are usually harmless unless, again, someone has a weak immune system, is an IV drug user, or has an indwelling device. Bacillus cereus is known for causing nasty bouts of food poisoning. Surgical patients with open wounds and premature babies are also at a heightened risk of Bacillus infection. In severe cases, it can cause pneumonia, endocarditis, meningitis, septicemia and death, especially in premature babies.

Another study analyzed 100 cell phones from 100 college students. All phones were contaminated with a wide-range of bacteria, proving that cell phones are the melting pots of the microbial world. Pathogenic bacteria made up 81% of all isolated bacteria, and antibiotic-resistant bacteria was present. Bacillus cereus was found the most, followed by Coagulase Negative Staph, Klebsiella pneumonia, Streptococcus pneumonia,  E coli, Salmonella spp and Shigella spp.  Also, the presence of E coli means that we have feces (poop) on our phones. That might make you cringe, but think about all the people who are probably scrolling on Instagram while on the throne.

What about surgeons who deal with the most intimate of the most intimate? Researchers analyzed 53 cell phones that belonged to 53 orthopedic surgeons. Phones were swabbed in the operating room, since phones are now commonplace in the OR. Results showed that 83% of phones had pathogenic bacteria, and one week out from disinfection, 75% of the phones had pathogenic bacteria. Like all of us, doctors, nurses and patients are addicted to their phones. It makes me wonder if we should rethink standard operating procedures for cell phone use in the hospital setting.

The good news is that we can clean and disinfect our phones without damaging them in the process. Microfiber cloths and alcohol-based lens wipes are shown to significantly decrease bacteria on phones. The surgeon study shows us that bacteria can rapidly recolonize on phones, so frequent cleaning is key. Also, live bacteria can thrive on phones from days to months. Generally, the greater the colonization of a bacteria, the longer it survives. This is different than the flu or cold viruses, which are shown to remain infectious on phones for only about 2 days. Other precautionary measures include not sharing phones, washing your hands frequently and not bringing your phone into places that have a lot of germs, like clinics and hospitals. Consider disconnecting for a bit, reducing the universal addiction to the phone and living a little bit of life without your phone. It’s possible, I promise. It’s actually quite freeing. You and your phone will both be okay. In fact, you can even get a beautiful relaxing bed for your phone, designed by Ariana Huffington. (It’s actually a killer self-care gift. ;))

Phones have a lot of germs, so what about their cousins, headphones and earbuds? They do, too, and even worse, they sometimes go right in the ear, making them clever vectors for pathogens. Bacteria that get into the ears can cause Otitis Externa, a painful infection of the outer ear and ear canal. Symptoms include pain, swelling, hearing loss, dizziness, vertigo, pus drainage, and ringing in the ears. One study showed that frequent use of earphones and frequent sharing of earphones leads to increased bacterial growth in the ears.  So, clean your head/earphones regularly and don’t share them. Or, buy a ZENBand from us instead. The pillow speakers are inside the band, don’t go in your ears, and the cloth of the band is porous, which is less likely to have viruses and bacteria than hard, solid surfaces.  ( Shameless plug, but not wrong.  😉 )

Thanks for reading, gang. Stay tuned for more stuff. If you haven’t followed me on Instagram yet, now’s your chance! ( Dare to dream, I know…)  But we have a lot of giveaways, tidbits of wellness wisdom, pictures of my dogs and funny videos that all relate to health and wellness.

If you haven’t read Manic Kingdom yet, why not? Seriously, you’re missing out. ( But only if you can handle it. The book is NOT for everyone.)

And if you missed some of my other blogs, here’s a few good links:

The dangers of cell phones in pregnancy: Possible outcomes for the baby

Can’t sleep? Read the below.

Wireless and Health: Why I Won’t Make a Bluetooth ZENBand