Tryptophan is most known for causing “Turkey coma” on Thanksgiving Day, but you’ve probably seen it sold in drug stores as a potential cure for depression. Can Tryptophan cure or help with depression? Let’s take a look at the evidence…, but basics first.

Tryptophan is an essential amino acid, which means that we cannot manufacture it on our own and get it from our diet. Tryptophan is a precursor for serotonin, a chemical long associated with depression. Older theories associated low serotonin with depression, but more recent theories suggest an irregularity in the metabolism of serotonin. Remember, serotonin ( low, high or irregular) is just one theory for depression. For others, please read one of my earlier blog posts.

Is Low Tryptophan Linked to Depression?

There is evidence that shows that acute tryptophan depletion causes depressive symptoms in otherwise healthy individuals , as well as exacerbates symptoms in those with a mental illness diagnosis. A review by Reilly et al. shows that acute tryptophan depletion increases feelings of panic and aggression, and another study shows that it can affect one’s ability to learn. I found that interesting, since “difficulty concentrating” is a common symptom of depression. I experienced that during my struggle with depression, and went from being a high school valedictorian to a top student at West Point to practically failing during my first year of medical school when my depression hit.

Does Supplementing with Tryptophan via Pill or Diet Help Depression?

Maybe. There’s not a robust body of evidence, but there are a few studies that stand out. A randomized controlled trial showed that adding 2 mg of tryptophan to 20 mg of Fluoxetine ( an SSRI) may have a more rapid antidepressant effect and help with insomnia, a common side effect when first starting an SSRI. I’m not a huge fan of SSRIs for depression, but I feel this study is worth mentioning. A small randomized controlled trial involving 25 healthy female volunteers compared a high tryptophan diet vs. a low tryptophan diet. The women who followed the high tryptophan diet had significantly lower symptoms of depression and anxiety.

What is 5-HTP and how does it relate to Tryptophan?

5-HTP stands for 5-hydroxytryptophan and is part of the metabolic pathway to create serotonin from tryptophan.

5-HTP is commonly sold in health stores and marketed as a treatment for depression. Does supplementing with 5-HTP help depression? Maybe. The evidence is of low-medium quality, but it seems to work better than placebo. If you decide you want to try a supplement, be sure to trust the supplement company that makes it. If you’re like me and prefer to boost tryptophan and 5-HTP via diet,  see below for a list of foods that are high in tryptophan. If you are a vegetarian, soybeans are a very good source of tryptophan, and of course you can always take a supplement.

What is the Relationship between Tryptophan, Depression & BAD Sleep?

If you are a frequent visitor of my blog, you’ll know that I write a lot about the relationship between depression and bad sleep. When I used to work as the chief of research for an international digital mental health company, we often marketed our insomnia program for depression. The reason we did that is because research shows that if you treat a depressed person’s insomnia and/or bad sleep habits, his/her depression will get better. This is without addressing the depression at all, which makes me wonder what percentage of “depression” cases are really cases of bad sleep? Of course, depression can lead to bad sleep habits, so I think it’s important to remember that depression and sleep have a chicken/egg relationship.

The reason I’m bringing up sleep is because tryptophan is a precursor for serotonin which is a precursor for melatonin. Melatonin is commonly nicknamed the “Vampire Hormone,” because it is the hormone that “only comes out when it’s dark,” and enables us to get the sleep we need for mental and physical wellbeing. It really does act like a vampire, because any light in your bedroom ( including the soft glow of phone lights), will interfere with melatonin secretion.  When we aren’t making enough or secreting enough melatonin, we won’t sleep well, and that can lead to symptoms of depression. 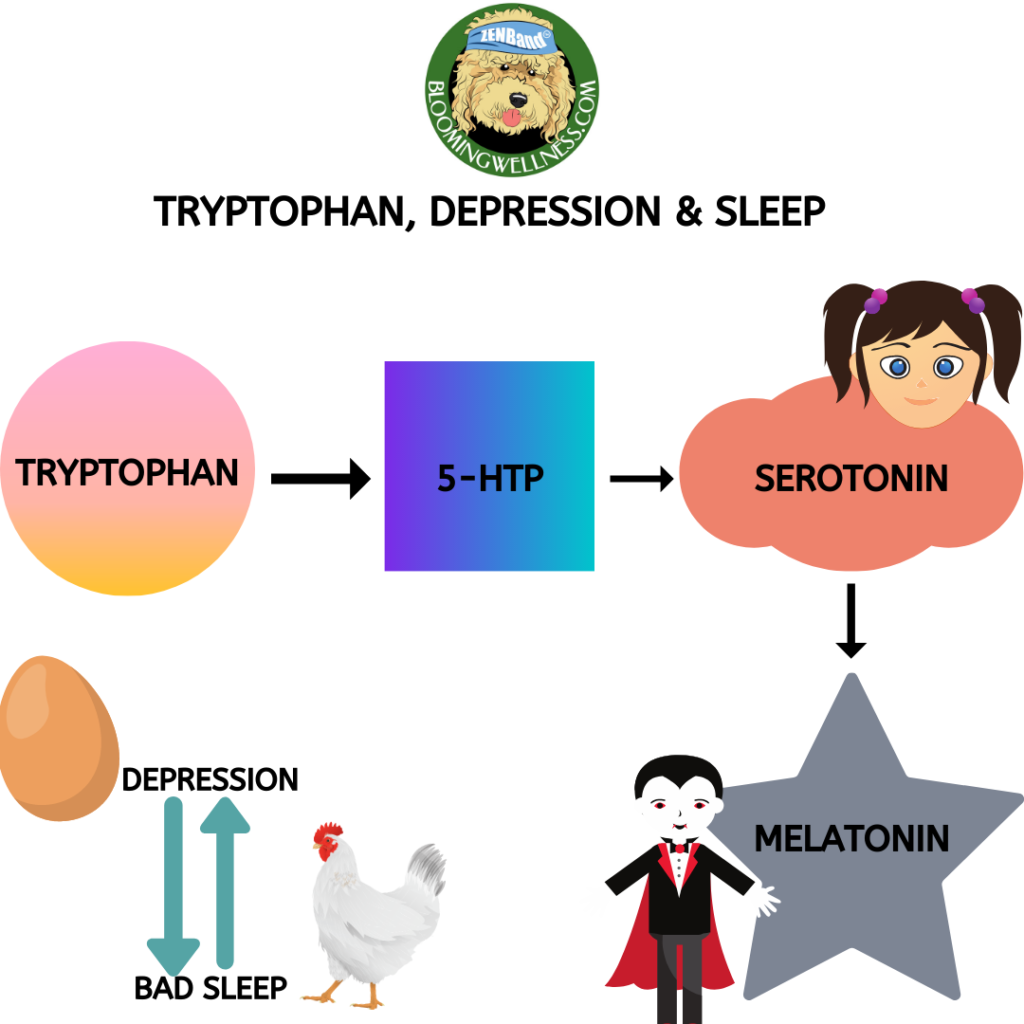 Hope this blog helps explain the relationship between tryptophan, 5-HTP and depression. See below for links to other ways diet may impact mood.

The riddle of Omega-3 Fatty Acids for Depression

The best diet for Depression: What the Research Says.