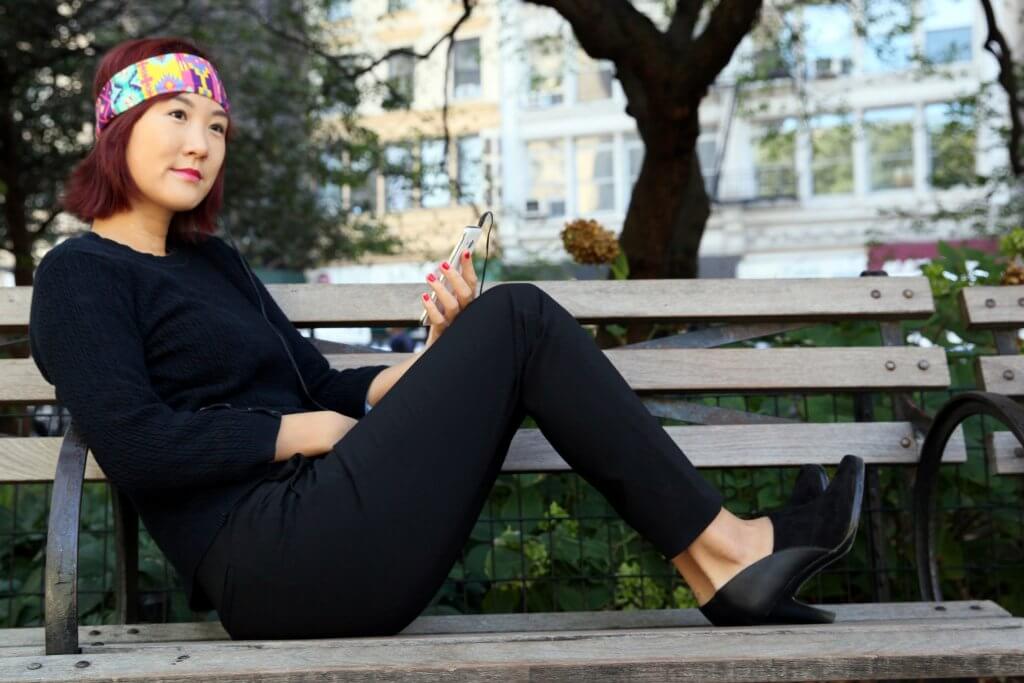 Migraines can be mysterious and ambiguous. So can migraine prevention tips and discovering what specifically works for you. One summer, while taking courses for my Masters of Public Health degree, I had a bizarre experience with migraines. It started after a trip to Germany. I came home and was hit with random attacks of severe pain on the left side of my head. The pain was debilitating to the point that all I could do was lie down on the ground and wait for it to go away. I kept a journal of potential triggers, including food, locations, sleep patterns, cardio, weight lifting, timing, hydration status, stress level…but couldn’t identify a clear pattern. One time, the headache occurred while I was calmly sitting in class. It became so excruciating, I had to leave. I couldn’t see, focus or do anything. Over the counter pain medication didn’t help, and when it was really bad, I took prescribed opioids. They helped, but I feared becoming dependent on such strong medication. This went on for about three months, and then the migraines went away. Poof! Gone! It was the strangest thing. I still have no idea what caused or cured the headaches. I often wonder if it was a reaction to some sort of  tick or mosquito bite. Truth is, I’ll never know.

A journal is a good first start when it comes to migraines. If you faithfully keep a journal, patterns may emerge and help you identify triggers. While a journal didn’t help me identify my triggers, it helped eliminate some. Pay special attention to foods, like dairy, alcohol and coffee and your hydration status. Also, if you’re a woman, be mindful of where you’re at on your menstrual cycle when you have a headache. Migraines are often associated with PMS. If you exercise a lot, do yoga or lift weights, be mindful of any neck or shoulder pain that may radiate to your head and cause a headache. Fatigue is a known trigger for mid-day headaches. Pay attention to how you’re sleeping at night and if you’re getting enough sleep. Of course, if you’re really worried and want a professional checkup, visit your doctor and run some tests.

A lot of people look to supplements or natural ways to prevent migraines, but what does the research say?  Below is a run-down of evidence-based migraine prevention tips. As always, pay attention to doses, timing and what is supported by a randomized, placebo-controlled trial, and what isn’t.

CoQ10 is found in the mitochondria of every cell and plays a key role in energy metabolism. One theory for migraines is a problem with mitochondrial energy metabolism, the specifics of which are beyond the scope of this blog. Outside of the mitochondria, CoQ10 is  a potent antioxidant. A lot of research has shown that supplementing with CoQ10 can improve cases of congestive heart failure and high blood pressure, and it may also help with migraines. One double-blind, randomized, placebo-controlled trial shows that CoQ10 supplements are helpful for migraines. Forty-two adults with migraines took 300 mgs of CoQ10 per day ( or 3 pills at 100mg/day) for 3 months. Compared to placebo, the CoQ10 group had significantly less migraines and significantly less nausea associated with the migraines. CoQ10 was also well tolerated.

High-dose magnesium is another migraine prevention tip. A multi-centered, randomized, double-blind, placebo-controlled trial included 81 adults with diagnosed migraines. Some folks received 600 mg of Magnesium/day for 3 months and  others received a placebo. At the end of 3 months, the group taking Magnesium showed a 41% decrease in headache frequency, compared to a 15% decrease in the placebo group. The Magnesium group also showed a significant decrease in the number of days with headaches and a significant decrease in OTC pain medication use. Side effects were minimal, with GI distress being the most common complaint.

At least one randomized, double-blind, placebo-controlled trial shows that magnesium supplements may also work for kids with migraines. The study included 86 kids ( ages 3-17), divided into two groups. One group took 9 mg/kg of body weight/day of Magnesium 3 times a day, and the other took a placebo. After 4 months, the Magnesium group showed a significant reduction in migraine frequency and severity compared to placebo. You can get Magnesium from your diet, but all of these studies use a high dose to yield a significant effect.

Another name for Riboflavin is Vitamin B2, which, like CoQ10, plays a role in mitochondria energy metabolism. A randomized trial involving 55 people with migraines showed that 400 mg of riboflavin/day for 3 months significantly reduced attack frequency and days with headache. The only adverse side effects reported were diarrhea and heavy urination. A lot of reputable brands only offer riboflavin as 100mg/pill, so keep that in mind.

I’ve written about Feverfew (Tanacetum parthenium)  a lot in the past, because I grow it in my garden and use it to make skin cream. Feverfew has a lot of health benefits, but it’s most studied for its ability to prevent migraines. The Lancet published a great randomized, double-blind, placebo-controlled crossover study on Feverfew and migraines. 72 volunteers were divided into two groups: One group took 1 capsule of Feverfew leaves/day and one group took a placebo pill for a duration of 2 months. At the end of 2 months, the groups switched and took their respective treatment for a subsequent 2 months. ( Switching groups in a crossover study  helps rule out placebo effect). In both the first 2 months and the second 2 months, the Feverfew group was associated with a significant reduction in number and severity of attacks, as well as a significant reduction in associated vomiting. No serious side effects were reported.

No one knows the exact mechanism for how Feverfew prevents migraines. The plant has 3 active components: 1) Parthenolide, 2) Canin and 3) Artecanin. These components are anti-inflammatory and may inhibit prostaglandins, histamine or blood vessel spasms that trigger migraines. I grow my own,  and eat the leaves whole.  It’s super easy to grow!

Another study (not randomized nor placebo controlled) showed that Butterbur may help reduce migraines in kids and adolescents. 108 kids (6-17) with diagnosed migraines took between 50-150 mg/ Butterbur/day for 4 months. 77% reported a decrease in number of migraines and 91% said they felt better after 4 months of treatment.

Below are other migraine prevention tips I’ve come across that you can try. They aren’t tested in randomized, placebo-controlled trials, but they are supported by anecdotes and used by both herbalists and natural practitioners.

Try this when you START to feel the onset of a migraine. Fill a large bowl with ice cold water. Add 2 drops of Peppermint Essential Oil; 2 drops of Ginger Essential Oil and 1 drop Marjoram Essential Oil.  Submerge three cloths. Apply to forehead,  back of head and back of neck.  Make sure it’s super cold!

2. If Stress Triggers Your Migraine:

When you start to feel the onset of a migraine,  rub Lavender Essential Oil in your temples and try listening to our Pain Relief ZENTones, which include low frequency delta and sub-delta waves and isochronic tones that may help reduce pain. ( There is at least one study showing that sub-delta waves help alleviate pain.)  ( I have a lot of female customers who listen to it when they are premenstrual.)

3. If Migraines related to PMS or Hormone changes:

In addition to some of the preventive tips mentioned above, you can try Sepia, which is from the skin of the cuttlefish.  It may help with other symptoms associated with PMS, like severe bloating, chills and mood swings.  For dosing, I would try 1 pill of 30cc of Sepia per day. ( I use this a week before my period, because I severely bloat and become mega irritated.)

Hope the above migraine prevention tips help!  If you have any questions, find me on instagram: Blooming Wellness on Instagram

Read my novel Manic Kingdom, but beware: It will disturb you!

Myo-Inositol for For Bulimia and OCD