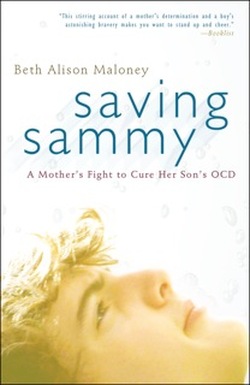 OCD vs PANDAS. No, I’m not talking about the bears. This is a very real and interesting topic and one that I never learned about in medical school. Any parent with a child should read this.

This is an interview I did with Attorney Beth Maloney, author of Saving Sammy, on a very important topic that could affect up to 50% of kids diagnosed with OCD. It may not be OCD after all.

Beth is a successful attorney who has represented both writers and producers, celebrity entertainers and athletes, including Johnny Carson, Kareem Abdul-Jabbar and Shaquille O’Neal. Her experience includes serving as Vice-President of Legal Affairs for Orion Pictures Corporation and producing motion pictures. She also handles general business matters, wills, trusts, and estate planning. Saving Sammy is her first book. It’s a heartwarming, true story based on her incredible experience with her son who was misdiagnosed with OCD and prescribed psychiatric medication, when he actually had PANDAS, a complication from a streptococcus infection that infects the brain. PANDAS stands for Pediatric Autoimmune Neuropsychiatric Disorders Associated with Streptococcal Infections. It’s common mental symptoms include OCD, ADHD symptoms, Tourette Syndrome, Anorexia and Trichotillomania. Her goal for writing Saving Sammy  is, “I want to change the face of mental illness for children. I want parents to insist that doctors eliminate the possibility of a physical cause, like a bacteria or virus, before starting children on psychiatric medication.”

Dr. Stair: How did you finally figure out that your son’s mental symptoms were due to PANDAS?

Beth: When he started presenting with symptoms, I took him first to a psychologist. We had just moved, his older brother was going away to school…, and though that hadn’t bothered anyone, my son started presenting with all these symptoms. The assumption was that he needed some sort of counseling. Honestly, no one was anxious about any of the stuff. It was an upbeat, positive atmosphere, but I thought I might have underestimated how it was all effecting my son. So I took him first to a psychologist, and my son continued to not improve. Then we were referred to a psychiatrist who diagnosed him with Obsessive Compulsive Disorder and placed him on the SSRI Zoloft. But my son continued to get worse. He never ever responded to the medication. We did every single thing we were requested to do. We created anxiety charts, administered the medication religiously, and…well, I’m an attorney so I’m very thorough. He never improved. Then he developed motor tics and verbal tics and was diagnosed with Tourette’s. A whole year had gone by, and there was no improvement. He was about to start Clonidine when he had a major crisis episode, and that’s when the doctor started telling me that he might never get better, I might have to find a place for him, and he might be in and out of hospitals for the rest of his life. One day, I called my mom sobbing to say that I could no longer maintain him at home. I wasn’t able to work and had 2 other kids at home. Then someone who worked with my mom called me and asked me if I had him tested for Strep. And I said he never had Strep. As far as I knew he never had strep. She said you don’t know that in less you run a blood test. That’s how we found out.

Dr. Stair:  Was your mom’s friend in the medical community?

Beth:  No. Her son had PANDAS for 10 years. And what had happened is one day, she took her daughter to see an ENT, because her daughter was having throat problems, and the ENT asked questions about her daughter’s family history. When that mom mentioned that her son had an OCD disorder, the ENT looked up at her and said, “Have you ever had your son tested for Strep?” As luck had it, he had just been to a medical seminar where PANDAS was briefly mentioned. So that’s how she found out.

Dr. Stair: Wow. I went to medical school, and I don’t think, until now, that I would ever even list PANDAS on my differential for an OCD disorder.

Beth:  Right. And that’s not uncommon. Actually Dr. Travis Stork, the ER physician on The Doctors said to me before the taping of the show, ” I just don’t understand why I never heard about this. I’m an ER physician and never even heard of it.” I told him that’s not unusual, which is why I set up meetings with deans at medical schools across the country trying to get PANDAS into their learning curriculum, because if you catch it early, it’s simple. The problem is that it’s not recognized so what happens is kids are being misdiagnosed and given the wrong medication. About a week ago the American Academy of Pediatrics came out with a bulletin recommending that preschoolers be evaluated for ADHD and potentially medicated. I’m looking at this thinking, “Are you kidding me? But we’re not going to run Strep tests?” If you go to the International PANDAS foundation and click on basics, there is a list of different behaviors that can indicate Strep. infection. ADHD is one of them.

Dr. Stair: From your research, can PANDAS ever present in adults? If, say, an adult was misdiagnosed as a child and now presenting with ADHD symptoms as an adult…, could that be due to an untreated Strep infection?

Beth: It could, but I think what happens, and this is what I gather from receiving almost 14,000 emails through my website, is that there comes a point in time when the infection becomes chronic, and the pathways in the brain are so damaged that they just stay that way. I hate to say that. Sometimes I get emails from parents who say, for example, “My God. My daughter is 25. When she was 15 she suddenly changed and had OCD. Is there hope for her now?” I just think the older you get, it’s a whole different thing.

Dr. Stair: I see, which is why it’s so critical to recognize it and treat it early. Is there a particular area of the brain that’s affected more than others?

Beth: Yes – it attacks the basal ganglia…which is the area that controls behavior. And when I say “it,” I’m referring to the antibody. It’s the antibody that attacks. ( Meaning it’s not actually the Strep. bacteria directly attacking the brain. When our immune system forms antibodies to the Strep. bacteria, in PANDAS, those antibodies also attack the basal ganglia area of the brain.)

Dr. Stair:  I read that you first started your son on penicillin? ( Strep infections can be treated with penicillin.)

Beth: Yes. Well, first, I went immediately for a blood test. Once you have strep, you are positive for strep for the rest of your life. The question is what is the level of antibody, and my son had an elevated titer. So we immediately put him on penicillin and figured we were done. The penicillin did have a positive effect, but the problem was after about 3 weeks it became completely ineffective. And so we tried a series of antibiotics. And then I called my mom’s friend back, and she gave me name for a doctor who knew the kids respond best to Augmentin. Across the board, that is what the children respond to.

Dr. Stair: How prevalent do you and other experts think PANDAS is?

Beth: Half of the children diagnosed with OCD. At least half of the kids with OCD.

Dr. Stair: Wow! Will the titer always be high?

Beth: What happens is the titers are at least initially high. There was 1 study done at Columbia university with 2 groups of mice. In the first group, only Strep. bacteria was injected, and the mice produced antibodies to the Strep and started OCD behavior- to the point of ripping hair out of their skin. Then they only injected the antibody in the second group of mice, not the bacteria, and the mice exhibited OCD behavior. So we know it’s the antibody causing the behavior.

Dr. Stair: Can you talk a little bit about your goal for Saving Sammy and the work you’re doing within the medical community?

Beth: My goal would be to have PANDAS taught in all pediatric residencies, because that’s where parents take their kids first: to the pediatricians.I spent a lot of time trying to convince doctors, and that didn’t really get me anywhere. So my goal is to get as much national publicity as possible. Writing the book and going on television has changed medicine. It has motivated parents to say, “Well I want my child to have a Strep test.” Every single day I get an email saying thank you so much for writing this book.

To purchase Saving Sammy from Amazon, click on the picture below:

2 Responses to “OCD vs PANDAS”