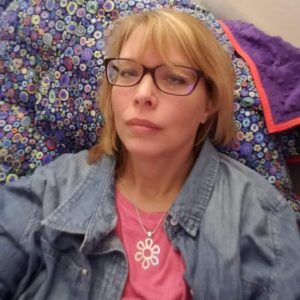 In 1968, I was born the 5th of 6 children to a young couple in a small town outside of Boston, MA. My parents were very active in their church community, and raised my siblings and me to embrace the traditions and beliefs taught there. My father was a hardworking man and my mother stayed home to raise us. It was a typical upbringing in the beginning.

My parents became fervent believers in an off-shoot movement within the church that preached communal living, amongst other things. When I was in elementary school, people started gathering at our family home. There was an open door policy. Our doors were open 24 hours a day to anyone who wished to enter. Some visited once. Some stayed for days, weeks, and months, while others stayed for years. I never knew who was coming and going. And sometimes people I had never met suddenly became a member of the household. These people were lost and confused and were seeking solace. They turned to my mother for spiritual and life guidance. And as one can imagine, this fueled her feelings of power and enabled her ability to control others. A cult was born.

My home life was confusing and isolated me from my peers. I was bullied and became a loner. I was afraid of anyone who wasn’t part of the church, as it had been drilled into me that they were evil for believing otherwise. As a teen, my life was filled with prayer meetings, attending church and participating in religious rallies. I was told I had demons inside me who were trying to take over my soul. They used the term oppression as opposed to possession. I struggled with untreated depression and panic attacks. I was told that was due to my need for a deliverance—another word for exorcism. I had three of those.

While some of the live-ins (my term for people who moved into our home) and prayer group members were fun, nice people who were just seeking peace, some were not safe for a child to be around. Later, some of these people would make the local news for the horrible things they did to children. Sometimes to me. Sometimes not. But I was exposed to them nevertheless. I was a very sensitive child who was always looking for love and acceptance and comfort. So when my kindergarten teacher pulled me aside while the other students went outside to play, I felt special. Then she molested me. She was not the last.

I didn’t know how to reconcile in my mind what was happening to me, so I disconnected from my thoughts and feelings. This was my way of enduring the inner chaos, in order to go about my day as if nothing had happened. This is called dissociation. It has been a lifelong coping skill for me. I no longer need it, but my mind and body automatically go there when I perceive a threat or reminder of past abusive or neglectful situations. 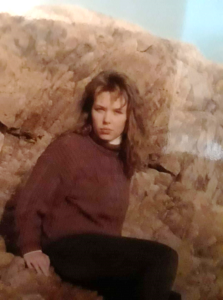 20-yr old Laura at her favorite   beach. (She was planning to kill herself on the same week this picture was taken.)

The emotional neglect and mind control throughout my childhood have affected my ability to function as an adult. I’ve had five suicide attempts—only after the first did my family visit me in the hospital. I’ve had too many inpatient psychiatric hospitalizations to count. But worst of all is the shame I carry. Sometimes crippling shame for things I had no control over. Things done to me.

Unable to hold down a job, I felt that I needed to find something where I could put my focus and get some pleasure and satisfaction from. One good friend, an artist who has fought her own battles, introduced me to creating art & making some craft projects. I found creative outlets such as painting, card making and eventually, woodworking. 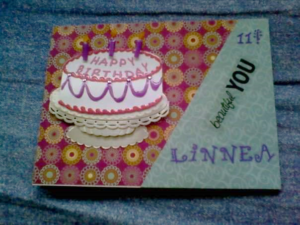 Having a project to focus on helps with my dissociation as it forces me to pay attention to what I’m doing in the moment as opposed to re-experiencing the past. It allows me to get my body and mind away from unwanted thoughts, feelings, images and sensations that make me want to flee this world. Either by dissociation or by acting on the desire to end my pain. End my life.

I found peace and an outlet in woodworking. But that’s not the end of my story. Complex PTSD is not something most people can recover from, as the interpersonal trauma we experienced embedded itself into our minds and bodies. About six years ago I started therapy with someone new. From the beginning, my gut already told me things weren’t right. But I was tired and just went through the motions. But the “therapeutic relationship” wasn’t therapeutic at all. It was emotionally abusive and destructive. In some ways, it mirrored the emotional abuse I suffered growing up. But I wasn’t fully aware of this dynamic for years. Very often victims of abuse are repeatedly abused—either because it’s something they just expect or they don’t consciously see the repetition…or both.

During that time I decided my art wasn’t really important. I decided nothing was important – showering, eating, or seeing friends. I was more dissociative than ever and I was very depressed. I was experiencing multiple panic attacks a day, as well as chronic migraines. I threw out all of my art supplies and the work I had done. All of the paints, cardstock and other mediums. All of the things I had ever produced. None of it mattered because no matter what I did and no matter how hard I tried, everything I enjoyed wasn’t important because, in my C-PTSD mind, people would always hurt me in the end.

A Way Back to Art and Woodworking

Thankfully, things changed. A little over a year ago I had an awakening. I’m not sure how it happened, but I saw my therapist for who she was and realized the harm she was doing to me. Eventually, I made the healthy decision to fire her and jump back into my art. Using colors and textures, designs and shapes take me away from my pain and confusion and allow me to enjoy myself, calm myself and sooth myself. And having a physical reminder—something I can touch, smell and see of a positive experience, uplifts me. Sometimes I keep my creations and sometimes I find joy in giving them away.

I felt free again and decided to start to replenish my art supplies. My friend, the artist, put together an art kit for me for my 50th birthday. I’m looking into joining an art studio for adults dealing with mental health issues. While I can’t afford much in the way of supplies, I’ve decided to repaint and refinish some of the furniture in my tiny apartment. 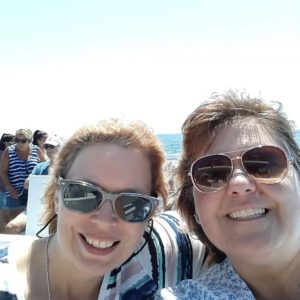 I’m honestly excited about using my creativity again and having my work displayed in my home where I can enjoy it and remind myself that in the end, it’s all going to be okay.

Laura’s life story is just one among countless stories of people suffering from PTSD/CPTSD. Her unceasing attempts to find ways of coping with her disorder and healing herself from her troubled past is truly inspiring. She have discovered the good that art and woodworking bring to her, and now she continues to re-discover it. Like her, there are other people who have found solace and positive distraction through woodworking, too. Get to know them at Sawinery.net.