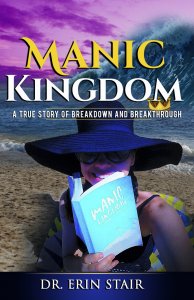 Below is a video interview I did with Gabe Howard and The Psych Central Podcast about my book Manic Kingdom, mental illness and embracing ambiguity.  I will admit that I was caught off guard during the interview, because I didn’t realize it was expected that each guest has a mental illness diagnosis. ( I should have done my homework.) I wrote Manic Kingdom to describe what it feels like to go through a mental breakdown as well as to show my unusual road to recovery, but as for a diagnosis, I don’t have one. I don’t go to therapy, don’t go to psychologists, psychiatrists, etc., nor am I on any medication. I DID go down that route, as shown in Manic Kingdom, but it didn’t work for me, and actually made me worse.  At one point, I had several diagnoses that didn’t make sense, which inspired me to dive deeper into the DSM, psychiatric diagnostic techniques, psychiatric medication and, yes, question psychiatry as a legitimate science. I’ve read a lot in this area. At one point, I served as chief editor for an organization dedicated to alternative mental health therapies, and this position allowed me to talk to many different people- from alternative practitioners, to traditional doctors who serve as spokespeople for Big Pharma, to patients who refer to themselves as “psychiatric survivors.”  The experience was an epiphany for me.  Up until that point, I tended to accept systems as they were, without questioning, partly because I didn’t have time to question them.  If it wasn’t for my own breakdown, I probably never would have researched the history of psychiatry nor the relationship between drug companies, consumers and doctors.  I must emphasize that this is my opinion and my experience- there are a ton of other opinions and experiences out there, and I encourage everyone to explore them. The last thing I want to do is force my opinion on someone else.

Also,  I think it’s perfectly okay to be an advocate for mental health and not have a specific mental illness diagnosis. Although labels can be satisfying, not everyone needs one. A diagnostic label is both efficient and necessary for getting an insurance company to pay for psychiatric treatment, but not everyone, including myself, desires or requires that kind of treatment. That boils down to personal choice and figuring out what works for you. Everyone has different needs, but I want to be clear on one thing: One can experience symptoms of mental illness and fight stigma while also questioning standards of care, diagnostic techniques, the efficacy of psychiatric medication, and current psychiatric practices. That’s part of the reason I dedicated Manic Kingdom to people who question systems. Accepting things as they were hurt me, so if this book does anything, I hope it inspires others to question systems when your gut tells you something feels off.  Another reason I wrote Manic Kingdom was to encourage people to embrace the ambiguity of both breakdowns and breakthroughs. You may never know why you had a breakdown and/or a breakthrough. Everything could be a speculation, though you might, through repetitive actions and observations, realize certain things help you and certain things make you worse. Although “I don’t know” might be an uncomfortable, lackluster and unsatisfactory answer, it certainly may be the most accurate. I certainly prefer it over a specific reason that lacks sufficient objective evidence.  My viewpoint might be unpopular, but I’ve seen enough, experienced enough and analyzed enough to express caution and encourage folks to take a second look.  Anyhow, I’ve written enough. 😉 Here is the interview with Gabe Howard:

Stories of Recovery Live! by Psych Central features a different person each week who is living with mental illness — and thriving! This week's guest is Dr. Erin Stair and she wrote the book Manic Kingdom. SORL! is sponsored by the Drugstars app. Do you take daily medication? Download the app and start #GivingByTaking. You do what you're already doing, and Drugstars donates to charities you choose: http://onelink.to/drugstars

Posted by PsychCentral.com on Wednesday, March 7, 2018

2 Responses to “Manic Kingdom: Interview with Psych Central about My Book & The Ambiguity of Diagnosing Mental Illness”