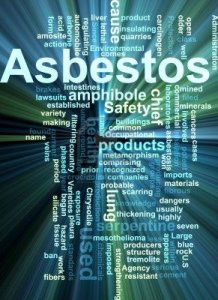 Cancer is a leading cause of death worldwide, according to the World Health Organization, with 12.7 million new cases and 7.6 million deaths in 2008. Included in that statistic is a rare, but preventable, form of cancer – mesothelioma.
The disease is caused by exposure to asbestos, a naturally occurring fiber and a known carcinogen. The microscopic fibers are inhaled and then embedded in the lining of the lungs and chest cavity.
Contrary to what most believe, asbestos is not banned in the United States. According to the Environmental Protection Agency (EPA), asbestos is still used in numerous products including clothing, roofing felt, vinyl floor tile, cement shingles, disk brake pads, brake blocks, gaskets, and roof coatings.
While asbestos is no longer mined in the United States it is still heavily imported. From 2006 to 2007 more than 7.6 million pounds of raw asbestos entered the country through the ports of New Orleans and Houston, according to Asbestos Nation. After leaving those ports, the toxic material was delivered to 29 states by either truck or rail. Although the ban on mining asbestos eliminates miners from occupational asbestos exposure, the toxin is still brought to all corners of the country and continues to put Americans in great danger.
As a result of importation and use of the material, there have been three distinct waves of asbestos exposure. The first wave of exposure impacted those handling asbestos in their occupations – mainly men who were miners, military personnel and tradesmen. The second wave of exposure impacted the workers families. Asbestos fibers were brought home on the employee’s clothing unknowingly exposing their families when particles become loose and inhaled.
The third – and current wave of asbestos exposure – is due to the DIY craze. Many homes and schools contain asbestos. The material is relatively harmless when left alone. However, if the material is disturbed and asbestos dust is released into the air, inhaled fibers could result in mesothelioma. If you have an older home consult an asbestos professional to have your home inspected before beginning any remodeling projects.
It is important to understand the symptoms of mesothelioma if you have been in contact with asbestos recently – or in the past. Symptoms of mesothelioma are commonly mistaken for other diseases, and the symptoms differ based on which of the three types of mesothelioma a person may have.
As a patient, if you believe you may have been exposed to asbestos knowing the signs could be life-changing.
The signs of the most common form of mesothelioma – pleural mesothelioma – are fatigue, difficulty breathing, hoarseness, difficulty swallowing, fluid buildup, fever, and night sweats. Symptoms of pleural mesothelioma are often mistaken for problems related to pneumonia, flu, or even lung cancer.
Early detection can change patient outcomes. For example, the 5-year survival rate for Stage 1 peritoneal mesothelioma patients is 87 percent, but only 29 percent for Stage IV.
The hope is that through awareness people may realize they were exposed and seek help, perhaps even before symptoms arise, by mentioning it their physician. A simple mention that you may have been exposed to asbestos could enable early detection, significantly increasing the chance of survival.