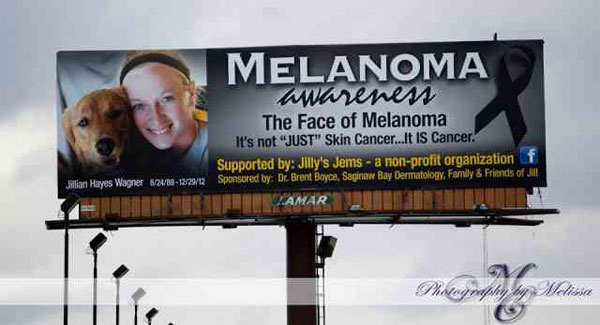 I’m honored to post a guest blog written by Susan Hayes, the incredible mom of Jillian Hayes. Jillian was a beautiful girl and avid soccer player who was diagnosed  with Stage IV Melanoma in 2010, when she was just a teenager.  When I first started talking to Susan, I said to her, “Your daughter looks like a soccer player.”  I play soccer, and I could just tell.  Susan told me that Jillian was a soccer player, and soccer was her passion. Then Susan sent me a picture of Jillian’s collection of soccer trophies.  Based on all her gold and silver bling, Jillian was QUITE the soccer player and probably kicking some butt in Heaven.  🙂   Despite a strong and tough fight, Jillian entered into rest in December of 2012.  Susan has created the blog, Jillian’s Journey with Melanoma- a Mother’s Story,  in an effort to help raise awareness for melanoma and the dangers of tanning salons, especially in young people.  Susan’s piece below is about seeing Jillian’s billboard for the first time after her death. – Erin
The Chain Link Fence
To say this past weekend was an emotional one would be an understatement. My family and I had plans to drive the three hours to see Jillian’s billboard in person. On a Saturday. Exactly seven weeks after she left this Earth. The plan was to meet Steve’s family, along with our Melanoma photographer Melissa, and two other Melanoma warriors, Andrea and Jolaina. Melissa had offered to take photos of all of us under Jillian’s billboard.
As I was getting ready to go, I was overwhelmed with sadness. The kind of grief that knocks you to your knees, taking your breath away. I didn’t want to go. I couldn’t go. In a panic, I messaged Melissa.
“Melissa, I don’t know if I can do this!”
Her reply, “What do you want to do, honey?”
Me: “Oh God. I have to. Shit. Ok. Deep breath. It’s three hours on the road with two small kids. I’ll be over my sadness by then.”
Melissa: “I got you!!!!!!!! I know this is hard. I know we can do this. We are going to do this!”
So, after putting on my Big Girl pants, I headed out the door, picked up the kids and set off for our grand adventure. And I was right, you don’t stay sad for long when you are surrounded by giggles and the conversation that only occurs from innocent eight year olds.
My resolve shattered when I got the first glimpse of the billboard up ahead. Oh! It was HUGE!! We found a parking lot and tumbled from our cars, walking along the fence to get as close as we could. My throat knotted, tears streaming from my face, I looked up. There she was! She was as big as life. I could even see the freckles sprinkled across her nose. My Jillian.
And then it hit me. I am looking at my precious daughter on a billboard. Sweet. I don’t want to see you on a billboard, honey! I want you here. With me. She felt so close, but so very far away. I talked to her then. I told her how much I missed her, how much I loved her and how proud I was of her. And how incredibly blessed I am to have known someone so special for 23 years. I told her I will fight for her until my dying day, and that she will never be forgotten. I think she smiled that crooked grin then.
I’ve had the weekend to mull all of this over. I’ve heard people say, “It will get easier with time.” “Time heals all wounds.” Or “At least she isn’t in pain anymore.” I just don’t know. Some days it feels like I’m making good progress, two steps forward. But then I get slammed back three. I am not the first person to lose a child or a loved one. I wonder sometimes if some of us suffering with grief don’t get the latitude we need. Does society put expectations on us to buck up, get over it? Move forward. It’s been six months, it’s been a year, five, or ten. How do you put a time stamp on love? You can’t.
For me, I’ve come to the conclusion that I won’t ever fully heal. I’ll just learn to live with the wound. And you know what? That’s okay. That wound will be a constant reminder of what my goal is and who Jillian IS.
So, if you know someone who has lost someone he/she loves, initiate conversation that will include his/her loved one. They may tear up. That is just confirmation that it still hurts. Deeply. I really believe that grievers fear their loved one will be forgotten. Their loved one mattered. They shared this life with us in some way. They still matter.
Our Heavenly loved ones will continue to be a part of our lives until there is no longer a chain link fence separating us.

Other Links to Check Out:
The Jillian Hayes Foundation
Jillian’s Petition to Ban Tanning Beds for Individuals under 18