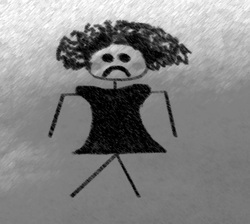 I write jokes for me and others sometimes. Here’s one of my favorites:
“Knock Knock!”
“Who’s There?”
“Ann”
“Ann Who?”
“Anhedonia!! “
😉
A pet peeve of mine is the idea that people aren’t ever supposed to be melancholic, passionate, depressed, angry, ecstatic or experience the highs and lows of the emotional rollercoaster. In today’s world, if someone is caught expressing a strong emotion, it won’t take long for someone to call him or her crazy. And sometimes it’s not just crazy. Sometimes even a doctor will diagnose that person with “mania,” “intermittent explosive disorder,”  “bipolar…,”and prescribe them medication. Often times I hear people labeling someone “manic” or “bipolar” if he or she is “too” excited or talking “too” fast or is being “too” imaginative.  If someone is deeply sad in the aftermath of a breakup, a death in the family or a lost job, it’s not uncommon for him or her to seek antidepressants or be advised to go to a psychiatrist and get a prescription.  A fiercely passionate person might be called a psycho and told to get on meds.  A curious kid might be bored, daydream in class and told he or she has Attention Deficit Disorder.  A guy who feels deeply wronged by someone and punches him might be told he has anger management issues.  I could go on forever, but my point is this: We are a pathetically “label happy” society, and anyone expressing degrees of emotion ( like all of us) risks being told they have a psychiatric ailment and getting put on medication.   In some cases, a diagnostic label and medication may be warranted, but in a lot of cases, a, transient emotion or character trait has the potential to get a person dubbed a mental case, which can scare and inspire that person to seek medication he or she doesn’t need.  It’s a sad truth, but we are all looking and eager to label people with a mental disease, when most of the time, it’s just people being people.   Or Vampires being hippies. 😉

What did the doctor diagnose the Peace-Loving Vampire with?
Anemia.
Many times, it’s not even doctors doing the labeling.  It’s friends, enemies, “frienemies,” family members, coworkers, Facebook friends, Twitter followers and so on.  All of a sudden, everyone is a psychiatrist.  It’s even trendy to joke about ourselves and others having mental illnesses or psychiatric symptoms.  Just sign on to any social networking internet site, and you’re bound to see funny posters about someone being bipolar, psychotic or attention deficit. Just the other day, I saw a poster that read, “All my Girlfriends are Bipolar, because Crazy chicks do it better.”  Yeah, sure, it’s funny, but are bipolar girls proven to be better in bed?  I think that study has yet to be conducted.  Imagine if the same was said for diabetic girls or girls with cancer. The joke loses its punch, as it’s not so trendy to make fun of physical diagnoses.  In our day to day conversation, we joke about mental diseases and symptoms all the time.  Recently, I asked a friend why she never called me back.  She said, “Oh, it was my ADD.” Of course it was a joke, and we both laughed, but has she ever been diagnosed with ADD? No.  Does she have it? Probably not.  Imagine if she said, “Oh, it was my cancer.”  Not funny, right? My friend probably just forgot to call me, but in a world where everyone can label him, herself or each other with a mental disorder, it’s a perfectly acceptable excuse, answer and joke.Today it’s trendy for college kids to take ADHD medication as “smart pills,” so that they can focus better, study for longer hours and get better grades. Do the college kids have ADHD?  Most likely, no.  The more probable answer is that they want a little booster to help them sit tight in a desk chair and plow through hours of challenging, academic work.  Would a little discipline work just as well? Probably, but self-discipline is a less attractive option than the quick-acting pills.At times, even I label myself or buy into another person’s label for me. When I’m feeling energetic and productive, I might joke, “Thank God, I’m in a manic phase and finally getting some work done!”  When I’m excited I have a tendency to talk fast, causing others to jokingly ask me if I’m in a manic phase.  Of course I’m not! I’m just excited!  Sometimes people used to tell me I was manic or suffered from insomnia, because I’d stay up all night studying.  That wasn’t mania or insomnia  keeping me up. It was the desire to get good grades, a fear of earning a grade below a 100% and the fear of telling my mom I earned a grade below 100%!  Could you call my staying up all night, obsessive? Definitely.  But that obsession caused me to graduate first in my class and receive several scholarship offers to college. Can obsession and dedication get confused with each other? Absolutely. 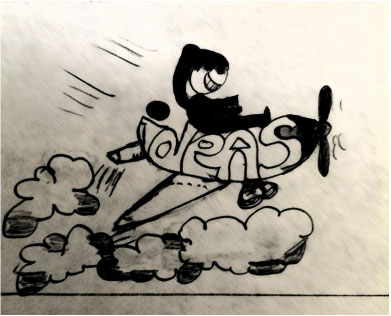 How about a more “extreme” example? One time, in the middle of a crowded bar, my girlfriend poured a drink on her then current boyfriend when she found out he cheated on her. Someone said she was “psycho and needed meds.”   Psycho?  Not a chance.  She was just angry, hurt, expressive and passionate, and boy, does “passionate” get confused with “psychotic” an awful lot.  ( Especially if you date me! )  🙂
You see, in a blink of an eye, it’s very easy for us to turn “normal” or, at the least, an “understandable reaction” into a pathology in a label-happy society.  With that in mind, don’t judge yourself or others too harshly or label yourself or others too lightly.To further prove my point, let’s label cartoons and other creatures that won’t be offended by this exercise with mental illnesses or symptoms.
I’ll start with my darling, black cat, Awol. I could easily label her as delusional or diagnose her with Narcissistic Personality Disorder since she acts like she rules the world 99.9% of the time.
How about Speedy Gonzales?  I’d classify his unnatural level of speed as “mania,” and since you need only 1 manic phase to be diagnosed as bipolar, I’d also call him bipolar.
Scooby Doo? I’d say Panic Disorder with Phobia.
Donald Duck?  I’ll say Exhibitionism since he only wore pants while swimming.
Wile E Coyote?  Obsessive Compulsive Disorder since he had to purchase everything at ACME, and I’ll also say Conduct Disorder since he did everything in his power to torture the Road Runner.
Dumbo?  Schizophrenia.  He was clearly psychotic for thinking he can fly with his ears.
Bigfoot? Avoidant Personality Disorder, since he makes headlines if someone even catches a glimpse of him.
Roadkill? Well…, I’ll say pathological gambling.
I could continue, but I think you get my point. When we are looking to label someone or something, we WILL find a label. If you want to label me, you will find a label, and if I want to label you, I’ll find a label.  The truth is I’m just being me, you’re just being you, Awol’s just being Awol, Speedy Gonzales is just Speedy Gonzales, Scooby Doo is just Scooby Doo, Donald Duck is just Donald Duck, Wile E Coyote is just Wile E Coyote, Dumbo is just Dumbo, Bigfoot is just Bigfoot and roadkill is just, well, they were either unlucky or not quick enough.
The take-home message is this: Sometimes the most appropriate way to feel is very sad, incredibly angry, deeply hurt, constantly obsessive and honestly passionate.  Feelings, and at times, extremes in feelings, are what makes us HUMAN!  Sometimes we are naturally inattentive, pathetically lazy, incredibly bored or blissfully energetic, and it’s not because we’re mentally ill. It’s because we’re human.  Each of us has quirks that others might deem odd, crazy, mental, psycho or weird,  but that doesn’t mean those quirks hurt us and that certainly doesn’t mean we should medicate them away.   If there was a “right” way to be all the time, we wouldn’t be human. We’d be robots, so make sure you are allowing yourself to escape labels, be human, be expressive and feel.
“Be sad, get mad, be glad, let passionate moments be had, because it doesn’t mean anything bad,”– Dr. Seus, if he was a Psychiatrist. 😉